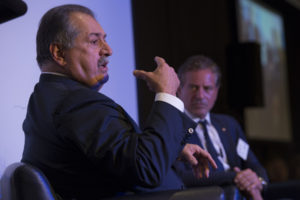 It was the first event Mr Liveris had taken part in in Australia since the Darwin-born son of Greek immigrants completed last year’s historic $130 billion merger between Dow and DuPont.

As well as sharing personal insights into his extraordinary career journey, the expansive Q&A covered the DowDuPont merger and global forces dominating business today, including innovation, digitisation, artificial intelligence, the workforces of the future and what Australian business needs to stay globally relevant and competitive.

Mr Liveris also reflected on his Greek roots, Hellenism and what led him to co-found The Hellenic Initiative in 2012, in the wake of the economic crisis, to support Greece’s recovery and renewal.

The event on 29 March 2018 was attended by key business leaders and Greek-Australians from across Australia. Proceeds will support The Hellenic Initiative Australia’s programs in Greece.

The Hellenic Initiative Australia thanks National Event Partner, ANZ, for co-hosting the event.