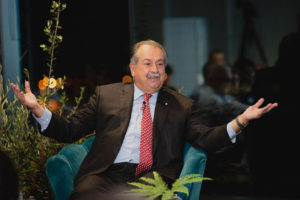 It was a special homecoming event for Mr Liveris, the Darwin-born son of Greek immigrants who retired from Dow in July 2018 after 40 years, having completed last year’s historic $130 billion merger between Dow and Dupont.

“It was a privilege to have Mr Liveris back in his home town for this special event, which brought together distin

As well as sharing personal insights into his extraordinary international career journey, Andrew N Liveris inspired attendees with his frank and compelling commentary on today’s key global issues and challenges for business and government, including energy policy and innovation.

Mr Liveris also reflected on his Greek roots and abiding love for Greece, which led him to co-found The Hellenic Initiative in 2012 as worldwide diaspora effort aim

ed at assisting the people of Greece through the economic crisis and aiding the nation’s recovery and and renewal through initiatives supporting economic development and entrepreneurship.

The Hellenic Initiative Australia thanks Event Sponsor, Jalouise, for supporting the event.

Proceeds from the evening will support The Hellenic Initiative Australia’s programs in Greece.