The Hellenic Initiative Australia has announced a major boost for Boroume’s dynamic Farmers’ Market Program which will increase amount of food being saved and directly donated to people in need in Greece.

The AU$71,000 grant from The Hellenic Initiative Australia will enable Boroume to increase the number of market collections in Athens and expand the program to Thessaloniki.
In 2017, Boroume saved 73.5 tonnes of fresh produce from markets in Athens, which was directly donated to local charities. The Hellenic Initiative Australia is doubling its funding this year to support the program’s expansion, which is expected to increase collections from 9 to 14 tonnes of food per month.

“We are delighted to be supporting the Farmers’ Market Program for a second year and are very excited by its greater impact and the expansion into Thessaloniki.” said The Hellenic Initiative Australia President Nicholas Pappas.

“This is The Hellenic Initiative Australia’s largest grant to date and reflects the strong partnership we have forged with Boroume while supporting its innovative food saving programs over the past three years,” Mr Pappas said. 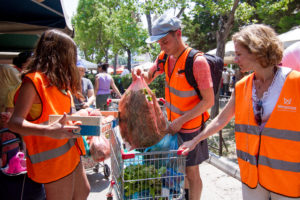 Boroume coordinates collections from 16 markets, including a new market launched today at Agios Pavlos in Athens. Another 10 markets are expected to come on board in the next 12 months, including three markets in Thessaloniki, following successful trials at Toumba and Kalamaria.

Boroume has saved and offered more than 100 tonnes of fresh produce from markets for donation to local charities since the Farmers’ Market Program began in October 2015.

“We are delighted that The Hellenic Initiative Australia has, for the third consecutive year, decided to support our organisation and will be doubling up its efforts to support the farmers’ market program,” Mr Theodoridis said.

“We are confident that through this support we will be able to save from even more farmers’ markets and save and offer even more produce every month not only in Athens and the Attica region but also in Thessaloniki,” Mr Theodoridis said. 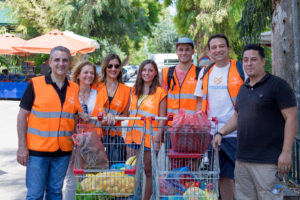 The grant also builds on THI’s Australian Volunteering Program, which last year provided additional volunteers from Australia to assist with delivery of the Farmers’ Market Program. More than 160 volunteers have assisted Boroume with collections at markets to date this year and more will be required as the program scales up.

“Our Australian connection is really important to us, not only for the financial support that we receive as an organisation, but because of all the Greek Australian volunteers that have helped us enormously with the farmers’ market program, especially during the summer months,” said Mr Theodoridis.

“We look forward to welcoming more volunteers from Australia in 2018,” he said.

More than 35 Australians volunteered with Boroume last year and The Hellenic Initiative Australia is calling for more volunteers to participate in Athens and Thessaloniki in 2018.